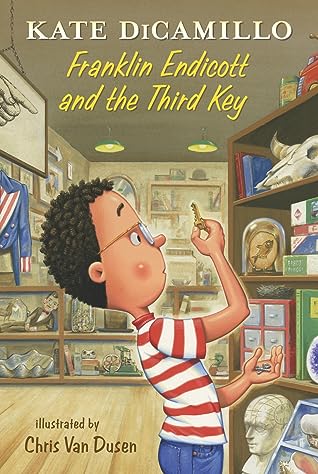 What is this book: A chapter book for new readers or an quick read-aloud with loved ones, with illustrations accompanying each page but not inserting themselves into the plot.

Who would read this book? Second grade or younger kids who can read on their own, even if only with recent mastery. The balance of humor and tension was great, with gentle humor at the absurdity of Franklin's worries but without a sense of meanness or disdain, as well as quick glimpses into a wider world. I recognized some references to previous books -- his sister Stella's friend Horace, the accordion music that Eugenia plays, but although they were fun reminders they weren't necessary for enjoyment; new readers would do fine, although the appearance of an enormous pig might surprise them. It's a warm and loving story about children secure in their world and in the love of the adults around them.

Who would I give it to? I'd offer it to a young reader in elementary school, or a teacher for those kids.

How did I get it? I received a free copy of this book from the publisher.

I'm enjoying my Nature Journaling class, where each Monday I grab a journal and go out to make terrible art and bad writing with friendly people who know a lot about nature. Then I leave intending to do more writing during the week, but I always forget until the next Monday.
I had two book clubs this week -- the younger elementary school kids, where we talked about all the Pigeon books by Mo Willems (conclusion: they are great!), and then my oldest book club, the one with friends. We've definitely dived deep into comfort books during the Pandemic, and this month we read Louisiana Longshot and then checked in over Skype on how we were doing, how far along our vaccinations were, and whether we would ever meet again. We are cautiously optimistic that we will have an in person meeting this summer, although we might go outside for the first once because we are all old.
Krispy Kreme offered free donuts to all seniors, so Nicky and I braved the line to claim his reward. And I spent Saturday driving to Pullman to get my younger son, who loaded up the car in about fifteen minutes and then I drove us home. It's nice to have both boys home with me again. It means there is a lot more laundry, so I should have more TV to report on soon. So far I am working my way through Voyager 2.25, where Janeway and Chakotay are stranded on a lonely planet together.
The Book Date does a weekly roundup of what people are reading, want to read, or have read each week called "It's Monday! What Are You Reading" and I'm going to go sign up. Ditto for the children's lit version at either Teach Mentor Texts or Unleashing Readers.
Started

"A Guide For Working Breeds," Vina Jie-Min Prasad. 2020 Hugo Short Story finalist. Cute dogs, killer robots. Fun for the whole family! I enjoyed the quick world building but wasn't emotionally convinced that their friendship grew that quickly and that strong.
Mercy Watson Goes For a Ride, Kate DiCamillo. This one was silly enough that it was easier for me to ignore  my "But that is irresponsible Pet Ownership" reaction. So I could enjoy Mercy's antics, since the author clearly wasn't going to let anyone die. My sympathy is entirely with the grumpy neighbor, though.
Secrets of the Sea, Evan Griffith. A biography of Jeanne Power that does a great job focussing on her work and achievements but also puts that in the context of the burden of sexism at the time -- how she had to spend significant time taking her work back from men trying to claim it or providing twice the evidence for her findings because people wanted to discount evidence for a woman. It also has a lot of pictures of octopus and their tentacles, so that is always a plus.
Don't Let the Pigeon Drive the Bus, The Pigeon Finds a Hot Dog, Don't Let the Pigeon Stay Up Late, The Pigeon Wants a Puppy, The Duckling Gets a Cookie, The Pigeon Has to Go to School, La Paloma Necesito Un Baño, Mo Willems. These were all for my 2/3rd grade book club. Not many kids are showing up, but apparently lots of kids are checking out the books, so I guess that's good? The ones who showed up were enthusiastic -- we all picked our favorites, talked about the importance of expression, and showed each other the best bits. I asked whether they identified with the Pigeon or the reader, but I'm not sure that made much of an impression.
Palate Cleansers

These books I'm barely reading; lately I use them bribes to get me to deal with the mail. Hmm. I should get back to that.

The Educated Child, William Bennett.
Wool, Hugh Howey.
Sorcerer to the Crown, Zen Cho.
Under the Eye of the Storm, John Hersey. Man's inherent weakness echoed in the fatal flaw in the keel of the boat.
Dates From Hell, Kim Harrison & others.
Reading and Learning to Read, Jo Anne Vaca.
Reading Challenges

I'm putting this at the end because I suspect it's complete fiction, but I feel I should attempt some structure.
I am reading:
Posted by Beth at 11:07 PM 2 comments: