I dragged all the boys with me on my post-Thanksgiving library run. Unfortunately, we somehow offended the 5th grader on the way, leading to strong sulks and stalking about and a refusal to look for books. I found three paperbacks to bring home, had one audio book on the hold shelf for me, five for my son, and demanded two music CDs as tribute before consenting to return home. So it was close to my goal of only getting as many books as I can read in a week. Three books is reasonable, right?

I probably won't read the books I got for my oldest son. I mean, I don't have time, what with all the challenges coming due and all. So I won't even mention them here.

I came home with:

This means I now have 65 things out on my library cards, which even more over my age than last week. So no purchases for me this week. I'll go share my Library Loot at the event co-hosted by Claire from the Captive Reader and Marg from The Adventures of an Intrepid Reader, where all the library addicts compare their treasures.
Posted by Beth at 12:50 AM No comments:

Reading Against the Clock 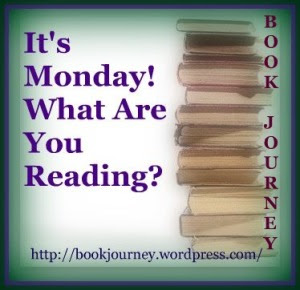 I'm not quite managing a book a day, but I am keeping a few steps ahead of the library guillotine. Next month I'll also be reading a heap of library books, since I have to finish all my sadly lagging challenges.

I also managed to get in a few jogs with my nephew, once with nephew and sons, and we rewarded ourselves with a a trip to see Despicable Me II, where we consumed about three times our caloric output in popcorn. Yum! Also I signed up for a 5K run in December, even though I can barely make it through our 2K jogs. It's the K9 Candy Cane run, so I'm hoping for lots of big scary dogs to propel me along. 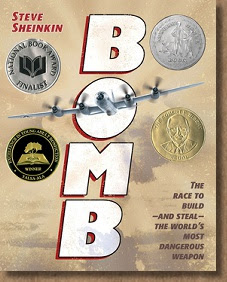 What am I currently reading?  My book bag has a library book from the 2012 Best of the Best list, a book I cannot renew (and that works for my Colors challenge), a nonfiction book from my shelves, and my NOOK.
What's up next? I'm hoping to get to Ann Aguirre's Outpost before the library calls it home, and then probably Tamora Pierce's Battle Magic. I'll replace Big Girl Small with the next book on my TBR list, The Boy Who Loved Tornadoes. The Alaska story came from my shelves, and when it's done I'll read something else from my shelf that works for a challenge; probably Toni Morrison's Paradise, which looks like it takes place in Oklahoma. This makes me sad, because I have the next Sarah Rees Brennan calling my name, only rather faintly since my son grabbed it to read and has left it at his father's house.  Unspoken, come back to me! Chime is on the final disk, so I've ordered Are These My Basoomas I See Before Me? from the library.

Despite my claim that this month I'm devoting to managing my library tally, I've almost doubled the books I have out. On the plus side, if I read them all in December, I'll manage to finish most of my challenges. On the minus side, I probably won't have time for other small parts of life, like Christmas decorating, baking, and gift-shopping. We must all choose our priorities, after all. I probably won't consult the rest of the family on this, in case their selfish desires keep me from my Grinch impersonation this year.

I did have the fun of doing the library run in a rush with my son while printing out his school assignment. Since he can never find his library card, I was tasked with logging into the printers while he went off to get my holds. His exaggerated stumbles under the load of books were mostly fake, I'm pretty sure, as were his pleading whispers for a chiropractor. Actually, there were only eight books, which means fewer than last week, but I think he was trying for some sort of point that I've obviously missed.

So, after hogging an entire shelf of the holds bookcase, I came home with:

Also, I got two music CDs, in case I ever finish my audio book..

This means I now have 62 things out on my library cards, which is well over my age so I'm not allowed to buy any books this week. At least it's still under my mother's age, and not even close to my grandmother's. I'll go share my Library Loot at the event co-hosted by Claire from the Captive Reader and Marg from The Adventures of an Intrepid Reader, where all the library addicts compare their treasures. And I think I'll sign up at Tynga's Stacking the Shelves, which asks for all the books acquired, which this week is just the library stuff.
Posted by Beth at 12:00 AM No comments:

My reading choices lately are highly driven by library due dates, with a close second of Reading Challenge deadlines. More pleasantly, I've overlapped my reading with my kids a bit more lately, which is always a source of warm delight to me.

I'm also part of a committee looking at our school district report cards, so I have some reading for that. And this week I went to see Gravity, and was politely quiet for most of the movie even though I sat by my brother. It was well worth the ticket price, although actually I didn't pay it since I had a free pass.

What am I currently reading?  My book bag has a library book out too long to be renewed, my next Reading-My-Library selection, a book from my shelves, and my NOOK. When I finish these, I'll pick a book from my shelves that helps with a challenge, and the next book on the Best Books of 2012 list from last year.

This November, I'm focusing on finishing my library books. Ideally I'd only have about five or ten books out at a time, since I get more from the library each week. But my eyes are always bigger than my, er, eyes, so I tend to pick up enough books for two or three weeks every Thursday. And then I notice the problem, try to show some self-restraint and read as fast as I can to catch up.

Of course, November is traditionally also the month when I notice that I'm far behind on my reading challenges, so I rush off getting the books I need to finish them. For example, I need about fifteen more Cybils books, so I requested them all from the library. I also need about fifteen more states for my state challenge, as well as a few colors for the Rainbow challenge. So I've got two incompatible goals here.

So, after hogging an entire shelf of the holds bookcase, I came home with:

Also, I got another music CD.

This means I now have 55 things out on my library cards, which is well over my age so I'm not allowed to buy any books this week. And before I got around to posting this I've noticed that I have another four books waiting for me.

Apparently I've very motivated by threats, even weak ones (BRING BACK THE BOOKS or we'll charge you 10 cents a day!). So I finished a pile of library books that have been lurking in my library case for months. Still no book reviewing, but at least I can imagine it happening someday.

What am I currently reading?  I concentrate on the library book due REAL SOON NOW, and after I finish that, I butterfly about between another library book, a book from my shelves, a library NOOK choice, my personal NOOK book, and maybe a book club book. And my audio book and all my inch-worm selections. Also, it was interesting that my currently-reading list is so short -- I think at one point is was down to only seven books, which for me is astonishing.
What will I read next? My next library book is another Cybils book about the Bomb, and I've got a book LibraryThing sent me set in NEBRASKA, and the library just mentioned that Erdrich's Round House (set in NORTH DAKOTA) is available for my NOOK. Basically I'm working on keeping ahead of my library due dates while frantically whittling down my challenges.

Salmon Run Under It

Schools been running for over two months, and I'm still exploring my new library day. Foolishly I like to go every week, at which time I pick up enough books for the next month. And then I drown in pages, but it's a good way to go. Lately I've been trying Thursdays, since I'm picking up at a kid at the city bus stop conveniently outside the library. If I'm early, I go in and browse. If I'm late, I'm unconcerned since he can do that. And I bring along any handy volunteers I can get my hands on.

My two goals this week were to get my library numbers down, and to check out all the books I needed for my yearly challenges. This goals are not actually compatible, you may notice. I had two books waiting for me on the hold shelf, and then I searched through the teaser display at the front looking for books that satisfy my various geographic challenges. And then I got the next six books for my Reading My Library challenge. So I came home with:

Over in the kidlit section, I examined the penultimate section of the J Fiction, and from the six shelves I chose:

Also, I got another music CD.

This means I leapt up to 49 things out on my library cards, and I can't age fast enough to surpass that, so no new book from the store for me this week. I've got to read all the Cybils books while getting my library count down -- I think the mid-twenties would be a good place but that's a far way off.