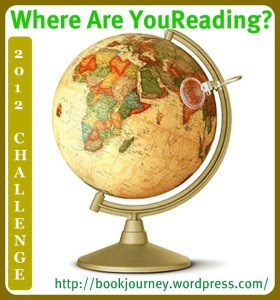 I managed to complete the 2012 Where Am I Reading Challenge, but I was better about finding the books than reviewing them. For completeness sake, I'm listing short responses to all the neglected books:

Fargo Rock City, Chuck Klosterman. A discussion of the impact glam rock and heavy metal had on society, specifically Klosterman's society in his tiny North Dakota hamlet and his later drunken career through college. My knowledge of heavy metal is minuscule, so much that I haven't even heard of most of the bands he discusses even though we aren't that far apart in age. (I did buy a KISS album once.) Also, I find people who use drugs as a form of recreation really boring, so a lot of the book kept making me fall asleep.

Chihuahua of the Baskervilles, Esri Allbritton. An amusing cosy mystery that took its characters seriously enough to hold my attention. Both the investigating characters and the murder suspects were quirky without being caricatures, and the humor avoided getting too grisly even as the body count climbed. I remember the tone fondly even as I've forgotten all the clues and possibly even the solution.

Jane, April Lindner. I enjoyed this retelling of Jane Eyre even though the story followed the plot closely enough that I never worried about what happened next. The writing held my interest without dealing the power of the original, but on the other hand I also had the enjoyment of seeing how L managed to get the next twist to make sense in the modern world.

Jasper Dash and the Flame Pits of Delaware, M.T. Anderson. It felt good to make my final state book be emphatically about the state it was set in, although I suspect that it might be hard for many Delawarians to recognize their state in this book. The silly story kept rollicking along, tossing in a few reality based details every few pages to ground the dinosaurs and arboreal squids.

King of the Mild Frontier, Chris Crutcher. The memoir shows where Crutcher gets many of the themes, characters, and settings for his books about kids with anger management issues, and he writes it in an amusing tone that doesn't disguise how annoying he must have been as a kid.

Home For a Spell, Madelyn Alt. Stumbling into the middle of this Midwestern cosy mystery series wasn't completely successful; it wasn't hard figuring out the recurring characters and their relationships but I didn't have quite enough empathy with them as the author counted on.

Moon Over Manifest, Clare Vanderpool. I can see how this won the Newbery -- weaving stories from two world wars, a girl's coming of age, and a mystery involving stories-within-stories are all elements aimed right at a librarian's heart. Some kids will also love it, but I don't think it will endure as a highly popular choice, though.

Oracle's Moon, Thea Harrison. This showed up from Felicia Day's book club, and charmed me immediately by working for my 50 states challenge. I also enjoyed it enough that I'll put other books in the series in my TBR list as a fun paranormal with the romance letting the action story take precedence.

Deadlocked, Charlaine Harris. I'm still enjoying the Sookie Stackhouse stories, but there is no question that the large overhead of complex histories and relationships are becoming a major drag.

Written in Bone, Sally Walker: I enjoyed the details of anthropological forensics covering several bodies uncovered in Maryland, although I was surprised at the end to discover it was meant as a YA nonfiction book. I just thought it was popular science. Also, my NOOK didn't handle the pictures well, so I missed all the illustrations.

Alvin Ho, Lenore Look: These early chapter books about a timid grade school boy and his accepting family are fun reads although I'd prefer a bit less tall tell elements; my favorite parts are the chapters that seem perfectly real and loving.

School of Fear, Gitty, Daneshvari: There is sort of a mini-genre of macabre kidlit, and the Fear School books fall into it. I enjoy them but I don't rush about pushing them into kids' hands.

Fair Game, Patricia Briggs. Brigg's books are becoming comfort reads for me; I enjoy their empowering characterization and also the actiony bits, although I tend to forget the plots rather quickly. I think I read this one twice this year, and I'm looking forward to her next urban fantasy release.

North Winds Blow Free, Elizabeth Howard. Solid historical fiction describing the lives of some workers on the Underground Railroad, with interesting ideas about what people owe to each other, even to strangers, and no modern sensibilities about women's rights or parental empathy.

Crooked Letter, Crooked Letter, Tom Franklin. I don't think I was supposed to be so distracted with sorrow over the wasted life in this book; the action thriller concentrated on the new murders happening around town and how those ripples affect the people, but I never got over the changes forced by the back story killings.

The Ghost Belonged to Me, Richard Peck. Rereading this book was interesting as I could compare my reactions to my memories. I remembered my response much better than any of the plot, so it's fun to see what events pulled that bittersweet emotion from my teen aged self.

Vampire Academy, Richelle Mead. I found the angst a bit annoying in this story about superpowered vampire kids at a boarding school, with royalty and blood drinking and forbidden love and all that. The wold building was interesting but the kids themselves not as much.

Super Human, Michael Carroll. My son raved about this book, so I planned to dislike it (I don't like being oversold) but the ending made me a believer, enough that I bought him the next book. And its location in Nebraska charmed me as well.

How to Rig an Election, Allen Raymond. A confessional by a Republic election manager describing the completely cynical and ethics-free approach to handling a candidate, including the shenanigans that got him sent to prison for a few months. Depressing look at modern politics indeed.

Wild, Wild Death, Casey Daniels. A paranormal mystery that never really engaged me, perhaps because I don't share the main character's passion for clothes. Or her really selfish worldview, for that matter. Maybe I'm just old.

Ten Miles Past Normal, Frances Dowell. The stresses of being a high school student on a goat farm give a good lens to this book about life in high school, with the problems of finding your own place, navigating the dating game, and figuring out how mature you really are. Fun even before I figured out it was set in North Carolina.

Geometry of Sisters, Luanne Rice: I was expecting a fluffy romance from the cover, but instead got a real book about a family dealing with grief from many directions. I kept tripping over how selfish all the characters were, claiming their love for each other even as they needlessly inflicted incredible pain on their family. I hope my family has a better sense that love is an action as much as an emotion.

Hot Water, Erin Brockovich. The intrepid environmental activist wanders down to South Carolina, leaving her EVIL father-in-law behind to work shenanigans on her son.

The Hum and the Shiver, Alex Bledsoe. Although some might find it slow-moving, I enjoyed the leisurely pace of this coming-home novel, where we slowly learn about both the characters and the magical powers permeating their valley home.

The Same Stuff as Stars, Katherine Paterson. I'm at exactly the wrong age to be reading books about neglected children -- too old to appreciate their agency (as a kid, I never troubled myself about loser parents, because who needs 'em anyway?) and too young not to scream abuse at the parents. So I'm not a good judge of this book.

The Azalea Assault, Alyce Carlson. A cosy mystery around a Virginia public relations committee, which was pleasant reading but not very memorable. I think I found the bestie's tendencies towards violence tedious.

Rock Bottom, Erin Brockovich. Two star-crossed lovers separated by a misunderstanding, although at least an entire town has collaborated together to create the problem and to prevent the couple from talking to each other. It was important not to look too closely to the plot of this environmental thriller.

Close Range, Annie Proulx. Wyoming appears to be a desperately unhappy place to live, where the only flickers of happiness tend to be generated by drug abuse. Let's just say that the last story, "Brokeback Mountain" brought a little extra cheer to the book.

Labels: 2012 Where Are You Reading

I love reading mini reviews. I've read four of these: Jane, Deadlocked, the Hum and the Shiver, and the Same Stuff as Stars. Jane bored me. I don't remember the plot of Deadlocked (I've gotten bored by these too, and don't plan on reading anymore). I was intrigued by the H and the S but still am unsure about my feelings about it. Katherine Paterson's book was so depressing and super heavy. Maybe it wouldn't read that way for a child, but yowzers, I have to say it's my least favorite of those of hers I've read.

I have so many warm feelings about Jane Eyre that Lindner had an easy audience in me :-). I keep reading Harris's book out of loyalty, but I think the Stackhouses went on far too long; my favorites of hers are the librarian books.

I was too depressed to even try the Paterson on my kids, and the cover isn't one that would make them try it on their own.