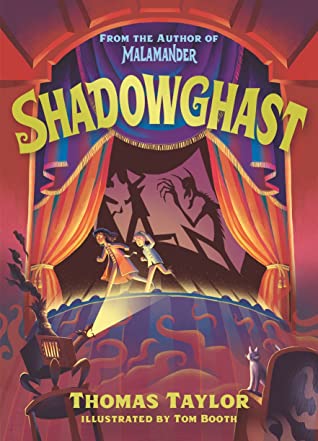 Shadowghast, by Thomas Taylor, published by Walker Books US

What is this book? Shadowghast is the third book in the Legends of Eerie-on-Sea series, and of course I haven't read the first three. But Taylor does a great job in letting newcomers like me in; I understand the setting and the relationships between the characters. There are references to previous books but just as backstory, and it's not given more weight than the backstory from before the series begins. There's a problem in that the professional magicians who are here to take over the local festival may have darker motives; the local amateurs are out of joint but don't see the same problems our young hero and his friend observe. But these dangers are alongside an emotional problem -- Herbert and Violet's friendship is tested because they each hope for different things -- if the magicians are good they may turn out to be connections to his lost past and family; if they are bad then Violet won't be left alone again. Are they seeing what they want to see, and are they betraying each other with their hopes? So the balance between physical and emotional stakes is well done.

Who would read this book? This is a middle grade fantasy that has orphaned protagonists with a lot of agency. Herbert himself is not as clever as Violet, so the author has an excuse to explain a lot of things to the reader. So it would be good for kids twelve and under who like adventure stories. As an adult, I found Herbert's full time job a bit shocking, but as a kid it wouldn't have bothered me.

Who would I give it to? I will offer it to a 3rd or 4th grader at my local elementary school. I think it would do well for younger kids who read well.

How did I get it?

I received a copy of this book from the Candlewick Press in return for an honest review.