Library Loot for the Long-Absent 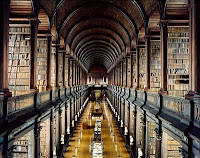 Hi -- remember me? I used to have a blog?  Well, I'm back.  I was held hostage by aliens for all of October, but I got away.  For a while, anyway, and of course, I immediately went back to the library.
The kind librarians stocked the hold shelf with some tasty treats for me:
We then grabbed some music (some that I'll be listening to while the kids are away, oops), so Pokemon films, and then two extra books fell into my bag on the way out:

Total Books from Library Elf (counting all the kid stuff that I'm legally responsible for even if I hope not to read it): 68. Stuff on my card: 64, but all the boys have lost their cards, so that includes their stuff.
I'll go sign up for Library Loot this week. That's a weekly event hosted in turns by Clare's The Captive Reader and Marg's The Adventures of an Intrepid Reader (this week's host) where bloggers can share their library finds of the week. Some of them make me look restrained.
Posted by Beth at 5:24 PM

I hope I stay this time.

Welcome back! I hope you enjoy your loot!