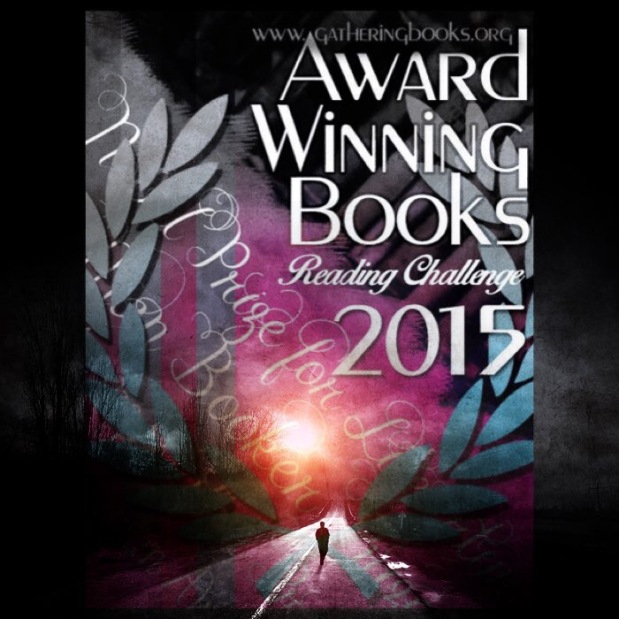 I've always thought that an Awards Book Club would be wonderful. Every month you read a book that won an award, and by varying the awards, you could read a wide variety of books. Feeling all smart? Man Booker Prize, or the Pulitzer. Heck, read the nonfiction winner if you are full of brains. More relaxed? How about the Edgar winner for a good mystery, or the Hugo or Nebula for some SF, or the Newbery for a shorter read? And then have your holiday party with a Caldecott book or by watching an Academy Award winner movie instead of reading at all!

Sadly, it turns out that most people prefer to read books they like instead of reading something completely different every month. Go figure! So I've never found anyone interested in that book club. But I can come really close by joining in on the challenge hosted by Gathering Books: Award Winning Books Reading Challenge 2015!

Since one of the other challenges I try to make is to march through the Cybils Finalist list, I'm pretty much guaranteed to make it through the Bronze Level (10 or fewer), I'm start by aiming at the Silver Level (11-25 books). This is complicated by the need to actually REVIEW the books, which last year I did not excel, but this year I hope to do better, if you can count one to two sentences as a review.

I may have already read a few -- I'm finishing up the last of the 2013 Cybils YA books and if any of the last three won, I'll be ahead! But I'm not checking until I finish and make my own judgements. Also, I'm not sure, but I'm assuming the books have to win -- no Silver medal Newbery's. Although the page does say Newbery Medal/Honor, so maybe that's too strict?

There's also a hashtag, so maybe these books will prompt a few tweets out of me. More likely I will just annoyingly cross my fingers at my family and shout HASHTAG AWBREAD2015 as I try to get them to read something good.

Very excited to have you join our award-winning reading challenge, and looking forward to your one-liner reviews! :) Award finalists or those who made it to the long-list/short-list (whatever they are called hehe) are also included. :) Here's the linky for March-April just in case you feel inspired to share your reflections on a few books. Your link-up would make you automatically eligible to win our book giveaway for March-April, courtesy of Pansing Books. :)
http://gbreadingchallenge.blogspot.com/p/mar.html