Bad Ways To Go: How They Croaked 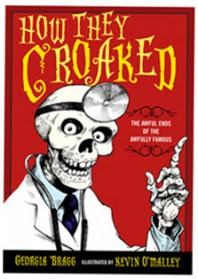 It was good.  (Complete review by my fifth grader)

My fifth grade son and I just completed the audio version of How They Croaked, which we both also read last year. Written by Georgia Bragg and read with relish by L.J. Ganser, it gleefully and gruesomely recounts the last days of a variety of famous people, with emphasis on the horrible and failed medical practices that ended them. Ranging from King Tut through Julius Caesar and Cleopatra, stopping by famous presidents such as George Washington (very bad final days) and less famous ones such as James Garfield (the assassination that wouldn't have worked if his doctors hadn't tried so hard), the chapters featured mostly famous people with a few surprises.

Each chapter gives a brief history of the featured corpse, with an emphasis on any traits or habits that contributed to their eventual demise. The end of the chapters feature macabre lists riffing off something previously mentioned, from synonyms for "dead" through symptoms of radiation poisoning. The historical and medical details seem sound enough, although I thought Bragg emphasized Curie's preference for her experiments over her children a bit more than the biographies I've read would agree with.

As an audio book in the car, it works very well. Tracks never went over five minutes or so, each chapter ran about three tracks, so it was always easy to find out place (I currently have four audio books running in the car, depending on the audience). If both my sons rode with me, X happily jumped into whichever chapter we were on, without worrying about who died while he was at swim practice or whatever. It's a fun book to read or listen to.
Posted by Beth at 11:13 PM

My son liked this one a lot too!