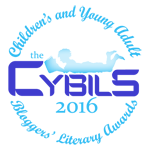 Happy New Year! The Cybils are Posted! That means it's time to start my first challenge --  my personal Cybils Shortlist Challenge!

I haven't actually finished last year's list yet, due to a reading collapse in December, although I had all the books. I'll finish ticking them off as I work through this years list. Endless optimism from me! I also note that I managed to read exactly zero of the nominees this year, which means that nothing I nominated made the cut.

I'm especially looking forward to the new audio category. I'm not sure if I should read the book that appears in as both an audio and a text choice, though, except that Grace Lin's illustrations definitely enhance the reading. Again, I'm listing the entries in reverse order, to encourage me to start with the longer ones.

April 12, 2018 -- Update I am declaring victory even though I am still missing one board book, which I think I will have to order and pay for if I want to see it.


Middle Grade:  (completed) (I liked them all)

Follow the Yarn: A Book of Colorsby Emily Sper
Jump Press
Nominated by: ediew (not cataloged at kcls, spl)

Elementary / Middle Grade Graphic Novels (DONE) (The winner wasn't my favorite, but I liked it a lot.)

Juvenile Non-Fiction: DONE! The winner was my #3, but I still loved it.

Easy Reader and Early Chapter Books (DONE):
Easy Readers (done). The winner didn't mesh with mine, but I and my kids have a weird sense of humor.

Early Chapter Books (done). The winner was my number 4, but I still liked it a lot.

Audio Books: (Complete) (I disliked the winner, but enjoyed all the others)