Cute and Sad: The Clue of the Linoleum Lederhosen

Today is Reading on the Beach's A-Z Wednesday, with C the starring letter. Every week bloggers are invited to spotlight a book starting with the letter of the week. You show the cover, tell the title, give a synopsis, and post a link. Just to be annoying, I like to actually read (sometimes just finish) the book on that day, so I include my little review. Makes things more interesting. Then I sign up on her page to see what everyone else came up with.

This is a special week for me, because I think I started with the letter C. So I've come full circle. My kids are also now starting to play along, although sometimes they forget. So X has nothing this week, but P and I frantically rampaged around our picture books after piano lessons and came up with precious little. We only had fifteen minutes to read (P also believes in reading the text) so our options were limited. We looked at A Child's Garden of Verses, but only had time to read a couple (which P found much less painful than expected). But we also found Curious George's Are You Curious, an abridged board book featuring some scenes from the life of the monkey. P's review: Boring, but fast to read. The rhymes are lame.

My book was chosen because it's been out from the library the longest, and it is also short. M.T. Anderson writes edgy YA books which I keep meaning to read and also has a wacky middle school series floating along. X checked out 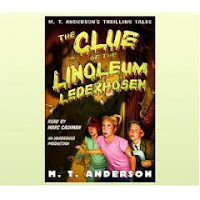 The Clue of the Linoleum Lederhosen, the second in a series involving kid superheroes and Lily, a would-be regular kid. The series satirises mystery series such as Nancy Drew, Hardy Boys, and the Boxcar Children, featuring a Tom Swift like boy inventor and a zombie fighting girl, along with regular kid Lily. They stumble into an old-fashioned luxury inn with wacky characters, including many other heroes of books series. There are Lemony Snicket like asides and authorial comments, but what I found most interesting were the occasional dips into real pathos. Kate, the zombie fighter, wrestles with a desire for a real life, which become more poignant later when the real fate of action heroes is revealed. She's trapped forever (or for the duration of her books' success) at her current age. In between the slapstick gags, that's a real tragedy. B (X liked this one a lot, but I didn't ask him if he also found it sad between the jokes.)

I suppose should could be a zombie girl that fights zombies, too.