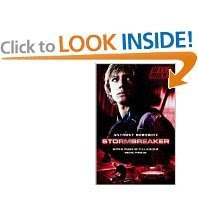 What if James Bond had a nephew? And what if the secret service wanted a young-looking spy? Anyone who enjoys speculating along these lines can see what Anthony Horowitz did with Stormbreaker, the first in the Alex Rider series. I've been ignoring these because I'm a snob, but a friend talked me into trying one, and it's a lot of fun.

The boy, Alex, is grounded with realism but his exploits are larger than life. His uncle, who dies in the first chapter, encouraged him to learn solid skills such as driving, martial arts, and self-sufficiency. This pays off when the uncle's old office blackmails Alex into finishing the highly dangerous mission that killed his uncle. Armed only with the super-gadgets the lab provides, Alex sets off to thwart a super-villain, complete with killer jelly-fish, underground mind/secret factory, evil henchmen, and deadly chases on foot, on all-terrain vehicles, and by airplane vs parachute.

I won't tell whether he succeeds, but the zillions of sequels might be a hint. I'll definitely offer this to my fifth grader. B
Posted by Beth at 10:22 PM