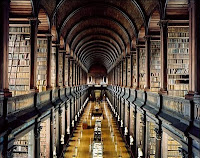 I haven't reported on my library trips lately, since I'm so deep in denial it's hard to get internet access. So this is a vast catch-up. I'm turning in more than I'm taking out, mostly, and especially in terms of real books to read (I let myself go with picture books still, since P is so much fun to read with). I'm still doomed, however. I think I have to read three books a day through Thursday, and these are all the books I haven't opened in two months, so you see how much incentive I had to read most of them...
In another change, our local city library has been snobbled up by the giant county system, so soon I'll probably pick up my holds there and only do one library visit a day. I've also gotten all the kids cards from the county (Xan had already conveniently lost his city card, although I wish we had noticed that he had some books out before we cancelled it. Turns out I don't bring anything back without the email reminders that you don't get with a cancelled card.)
It also means that I'll do my read-a-book from every shelf at that local library, although that is also doomed since I know they plan to replace the building in a few years. Sniff. I love the library over the river.
Meanwhile, my hold shelf offered up (over three weeks, remember, I'm crazy but not that crazy):
I then browsed the picture books, looking for another book from my recommended lists, and found
That last book I grabbed because the cover reminded me of the boys' Greek great-grandmother. We found it by playing the library game. You pick three numbers, and then try to find a book you want to read that has those numbers as their Dewey catalog. You can rearrange the numbers as you need. We played over in the microscopic nonfiction section, so we actually read the "Counting on the Taiga" book, but the goat one was near by. I think the biggest thing P learned from this game is that his mom and her family were weird from earliest historical records.

Total Books from Library Elf (counting all the kid stuff that I'm legally responsible for even if I hope not to read it): 89. Stuff on my card: 73. Missing books: One.
I'll go sign up for Library Loot this week. That's a weekly event hosted in turns by Eva's A Striped Armchair and Marg's Reading Adventures (this week's host) where bloggers can share their library finds of the week. Some of them make me look restrained.
Posted by Beth at 12:37 PM