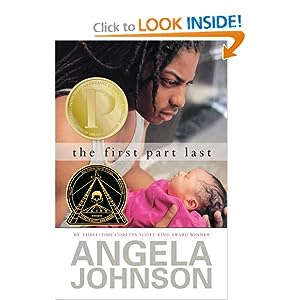 books I read during the readathon were all good enough that I'll sign up to read more from each author.


Angela Johnson is an author that I've slowly discovered. The First Part Last

is a problem novel, with Bobby's problem being that he's a sixteen-year-old single father. The story is told in alternating "now" and "then" sections, with now his struggles to balance school and his infant daughter, and then the countdown through his girlfriend's pregnancy. And then there is the kicker at the end (* see spoiler below), which for me just seemed silly. Trying to raise an infant is hard enough, let alone doing it before you finish high school, so throwing extra problems into a problem book just gets melodramatic. Sometimes I found Bobby hard to understand -- his passionate love of graffiti painting, for example, but most of the time this slim book works as the story of a boy learning to be a father, experiencing the love you feel for your tiny baby.

I spent most of Ursula K. Le Guin's Powers

waiting for more horrible thing to happen to the protagonist, but his life was much pleasanter than my fears for him. Since Gavir starts off as a slave in a Roman type city, this seemed reasonable. Le Guin does a realistic job of describing Gavir's loyalties and growing comprehension of his status and responsibilities, both as a slave and later as an escapee and a free man. This is the third book in a loosely connected trilogy, once again confounding my expectations because I kept expecting everything from the earlier books to come together in a grand knot; instead we just meet some people we've seen before. I think I'll like it even more on a second read, when I'm not tripping over my mistaken preconceptions. Which is odd; usually I read without really worrying about what comes next -- I'm not sure what made this book all about the foreboding for me.

was easier. Yes, I kept worrying that the romance plot would take over, but the book stayed true to its heart as a caper story, juggling some eccentrics just touching the line of implausibility. The family was quirky but real; I was glad that efforts were made to bring the bratty youngest daughter back into line with the other siblings. Fluffy but fun.

Maggie Stiefvater's Lament is another book about a early high schooler facing an interesting time, but here the interesting stuff is faeries and deadly assassins and other high energy problems. The cute boy is more front and center, but I didn't mind that as much as the issue seemed to be whether he intended to break her heart or her entire body. This cover is much better than the one on my library book (update -- but now it seems to be gone. Sorry!).

I like how these four books fit together. Two books have black boys on the cover. Two books are by a Johnson. Two star girls, two boys. Two fantasies, two realistic fictions. The boys end up with daughters to care for, the girls stay carefree and young. All of them are written by women. Silly trivia, but I like stacking up books and comparing them.