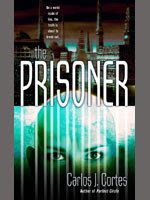 Dang nab it, I forgot it was Wednesday. I almost started my K book just now, but remembered my 8AM meeting. I'll just be late.

Instead I'll mention this P book I read. It also starts with a consonant. The Prisoner, by Carlos J. Cortes, was mentioned by Jo Walton as a nominee for the Philip K Dick award, a prize for a science fiction paperback. (It didn't win; I just checked.) I admit, it wasn't my cup of tea, being a thriller more concerned with action, then ideas, and finally characters. The action involved a daring prison break and long slogs through the sewers of Washington DC, the ideas involved freezing human bodies alive, either to await medical treatment (for the rich) or to conveniently serve a prison sentence. Giant corporations run the "ice boxes" and some of the people heading these corporations are Not Nice. But the corporations are now controlling the government...

The bad guys were bad, and stupid, while the good guys were good, and not all that bright, honestly. The sewers were very accurately described, but my main reaction was "ick." I mean, it was awful for the characters to walk through them, but it was awful for me to have to read about it as well. There was action-y action, with assassins and runs through the city (above ground, a few times) and double-crosses, and two characters who fell in love because, well, I'm not sure, maybe there was something in the water in the sewer. Ew. Anyway, I finished it, which means it has something going for it considering how uncomfortable much of the action made me, but I can see why it didn't win. C+

Two minor annoyances for me: one character dies before we meet him; he doesn't survive the defrosting from prison. His friends are sad, and at the end they demand that he get the Medal of Honor. But he and his team all had the same risks; the survivors then had to run through a lot more dangers in the course of the book. I don't think dying is the main criteria of the Medal, and I don't think grieving friends is a criteria either. It just seemed to cheapen things.

The second annoyance is pathetic and has nothing to do with the book -- I'm vaguely trying to mark when I read a book by someone who isn't white (my PoC "person of color") tag, but sometimes I have no idea. It turns out I don't really understand the term Hispanic, and the internet is not helpful (who knew?). I hate having lists and not knowing how to manage them.
Posted by Beth at 12:21 AM